We've had such a good week celebrating Christmas. We have had our Christmas party - a disco and party games in the hall and music and food in our classroom! Here are some pictures of the fun we had!

Come to the Great North Museum!

We were so enthused by our visit to the Great North Museum, that we have written scripts for a persuasive advert to make people want to go and have the same experience we did. After writing scripts in groups, we filmed adverts using the green screen and used Green Screen and iMovie to edit our footage. The results are amazing and we had lots of fun in the process! 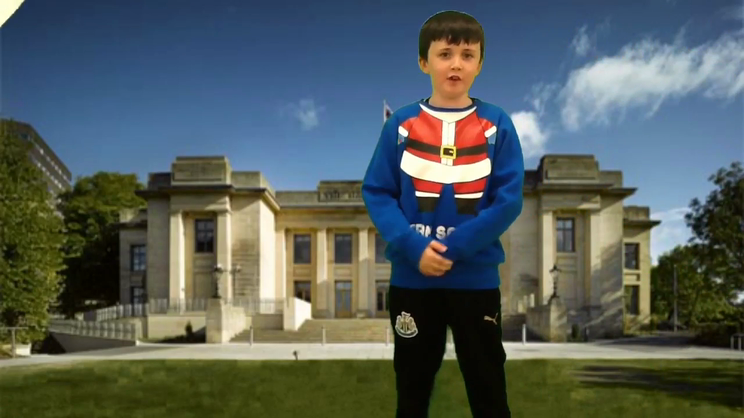 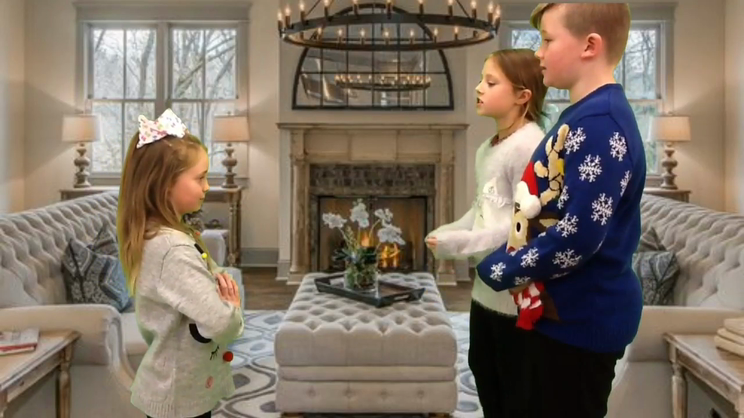 We have visited the Great North Museum and explored all of the amazing exhibits. Our day was packed with exciting activities such as a show in the planetarium and a workshop with one of the doctors from Newcastle University! We also had time to look around the entire museum and found lots of interesting animals and artefacts.The visit coincided with our space topic and has given us lots of ideas for writing...watch this space for our persuasive adverts!

The Case of the Mystery Man

Walbottle Campus were kind enough to invite our class to a history workshop this week. We arrived and were given a brief about a man who had been found near Denton Burn, our challenge was to find our who he was, where he had come from and how he ended up there! Lots of evidence was left for us to decipher, such as bus timetables, text messages and university identification. Year 5 really enjoyed investigating the evidence left behind and we all got write a police report with our findings! Our writing included key history skills - 'Point, Evidence and Explain'- and a variety of theories.

As part of our design and technology topic, we have looked at designs of Anglo-Saxon jewellery. This week, we made our first attempt at crosses which could be used as pendants or belt buckles. We looked at examples of those actually made in Anglo-Saxon times and based our designs from those.

In our first week back after half-term, we have been learning to use rhythms found in samba music. We were introduced to surdo, reponique and tambourim drums, as well as agogo and cow bells. We auditioned to be part of the teams responsible for surdo drums and agogo bells this week and over the coming weeks we will all be assigned an instrument. We can't wait to perform altogether!

Over the last week, we have been exploring perimeter and area in Maths. First, we made area robots and found their surface area.

We have also been practising how to calculate perimeter - we came in to our classroom and their were shapes taped to the floor! Using our feet to measure, we knew we needed to add all measurements to find the correct answer. 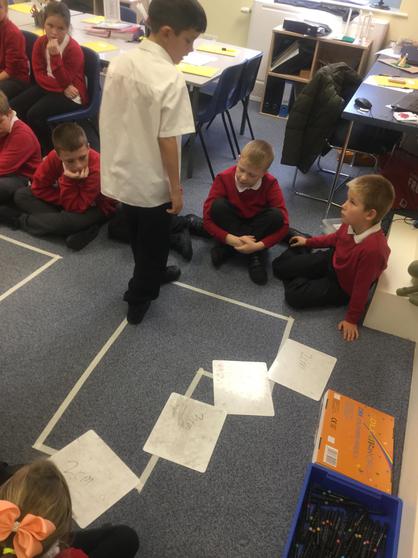 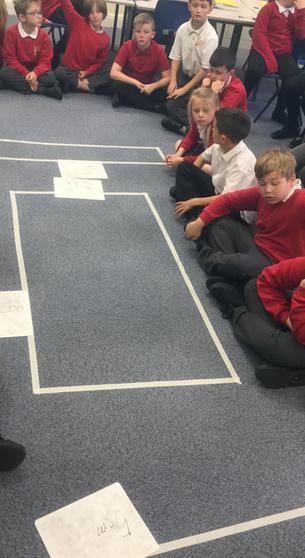 We have been writing about a film we have watched on Literacy Shed about a lighthouse and have written the story, in our own words, in sections - the opening, climax and resolution. There is a huge focus on adventurous vocabulary in Year 5, Paige and Tammy have definitely risen to the challenge! Here are their opening paragraphs:

Joyously coming to completion of my entry, cheering raved through my open window. Suddenly, I stood up and sealed it and hopefully, I had gotten rid of the abysmal sound. The dazzling moon took charge of the sapphire sky and figures danced along the street. Blustery waves were crashing against the rocky cliffs as the lights beamed around and around and it struck the tiled rooftops of the village below.

My entry was almost finished. Cheering boomed through the open window as I completed my final word. I could hardly keep myself in from all the noise so I slammed the glass window shut. Finally, peace had come. The moon illuminated the sapphire sky as the silhouettes moved in the light. Wailing waves crashed against the crooked cliff. Light rotated around the village (to protect the boats from danger) over the mis-matched rooftops.

We're Going on an Angle Hunt...

This week, in maths, Year 5 have been investigating angles. We looked around school to find angles in a real life setting and found lots of examples! We collated our information and collaboratively organised what we had found. Below is a fantastic example of what some Year 5 pupils could see.

In our P.E lessons this half term, we are focussing on football. So far, Year 5 have been perfecting their passing, shooting and dribbling skills! Here are some photos to show how well we are getting on...

Being Us in Our School

This week in PSHE, Year 5 have been thinking about how school makes them feel and why they enjoy it. They came up with an abundance of adjectives through a class discussion and made this 'graffiti' wall in class!