Our fabulous hens have had eight chicks! This week they've been visiting all the classes. Year 5 thought they were very cute. 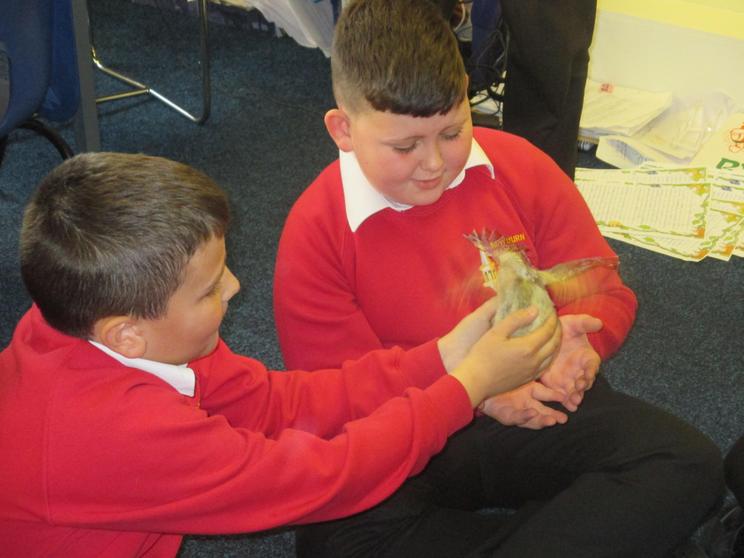 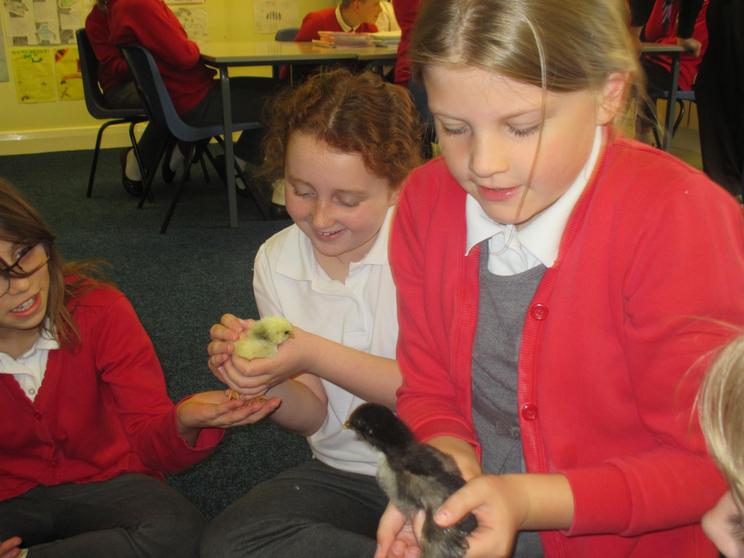 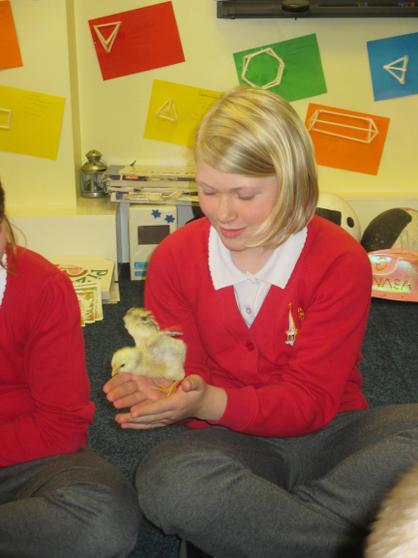 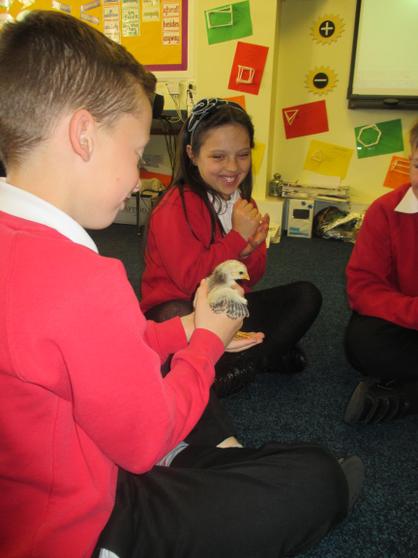 What an adventure it would be! We have been imagining what it would be like to take a trip to the Amazon Rainforest. We realised we couldn't talk Mrs. McFadyen into letting us head off to South America on a school trip so we have been using our imagination. We have produced some lovely descriptive writing based around a journey into the rainforest as well as using Henri Rousseau as an inspiration for our class  oil pastel work. 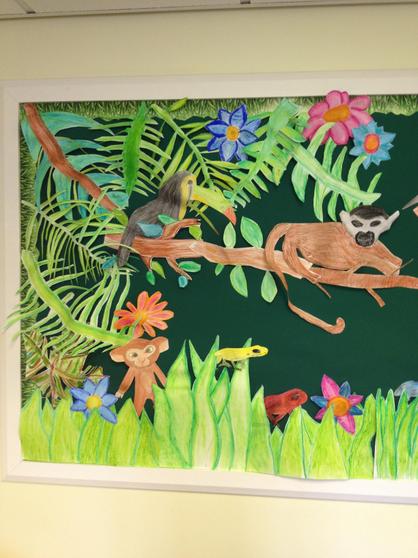 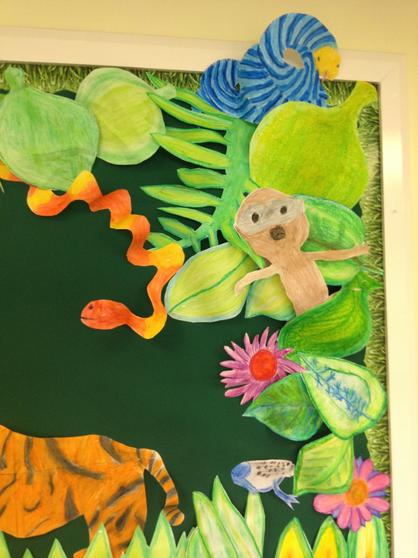 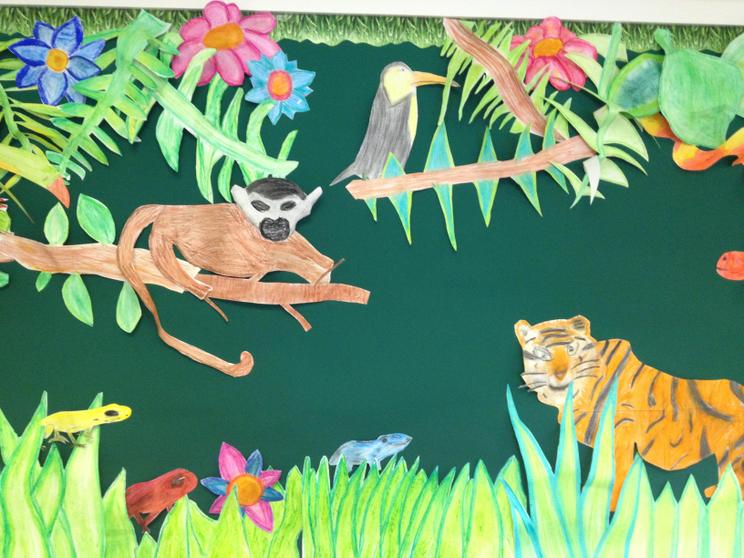 Following our visit to Kielder Water, Year 5 wrote and produced their very own class assembly. Our first performance was to the whole school followed by another for our parents. Hopefully we showed you all how much fun we had, even though the weather was terrible.

I'd like to thank all the parents for your support of this trip. It is the first year we have had every child take part. The children had a fantastic time and will treasure the memories they have from this trip forever. Thanks again.

Newcastle Music Service came to school and gave us a taster session with violins and cellos. We had a great time playing the theme from 'Tetris' (Korobeiniki).

As part of our 'Myths and Legends' topic, we have studied the story of Perseus and Medusa. We watched a short film based on the Anthony Horowitz retelling of the tale. Following this we wrote our own version of Perseus' challenge with the gorgon. Abbey wrote a stunning piece called 'The Gorgon's Lair', here it is for you to enjoy ...

As he crept past the immortalised warriors, Perseus feared that he would become one of the isolated group. Skeleton-like trees cascaded over the edge of the ravine. Frozen people were scattered in every direction. Their faces looked like they had been photographed in the last few seconds of their lives, fear in their eyes! The colossal gnarled walls of the gorge towered over Perseus, making him feel claustrophobic. Fear created a cloak of darkness over him. As Perseus got nearer to the evil serpent's lair, an anxious feeling shot through him with every step. Eventually, the entrance of the yawning cave appeared. This was it. No turning back. THUMP, THUMP, the silence was broken by Perseus' own heart beat. The stone trophies told him to go back, but it was too late. Perseus had gone too far.

Cautiously, Persueus entered the cave. The decaying skeletons of previous unwanted intruders decorated the floor. The stench of death oozed from every crevice. The semi-gloom was broken by the reflection of Perseus' bronze shield. As he got further and further into the cave, fear began to creep further and further down his spine, like a venomous snake. Suddenly, a harsh hissing echoed through the darkness, followed by a disturbing laugh. Perseus closed his eyes, he didn't want to die like this. An obsidian silhouette of a snake-like woman slithered from the shadows. Medusa's whispers tried to hypnotise Perseus, but failed. Adrenalin filled his body as he lifted his sword. He was nervous. What if he missed? Surely he could have just one look, just to make sure? With one heavy blow, Perseus decapitated the gorgon and her body fell to the ground. Perseus stepped back to avoid being hit by the headless corpse, but slid on the blood. He fell on his back and was almost turned to stone, luckily his eyes were sealed shut. He dropped his trophy into his sack and left the cave. He weaved his way back through the valley and out of the haunting landscape.

Hope you enjoyed it as much as we did in class!

In Science, Year 5 have been studying changing states. As part of the topic we have taken rock salt and refined it to produce pure table salt. We used four scientific processes - crushing, dissolving, filtering and evaporation. We have used a lot of new scientific terminology and some new equipment. All pupils were involved in each stage of the experiment. The end result was good enough to sprinkle on some chips!

Every two weeks eight Year 5 and 6 pupils make the trip across the River Tyne to Thorp Academy.  We were invited by Mr Wilkinson to take part in a series of Master Classes for Maths.  Our pupils have thoroughly enjoyed getting to know new people and challenging themselves with some tricky problem solving activities.

Newcastle Road Safety Team have been in Year 5 encouraging us to think about key road safety messages. We split into small groups and looked at how to cross roads safely.  We spent time outside the school practising these skills and we now feel we can cross roads using all the skills we have been taught.

All I want is a deli sandwich?

As part of our 'What's so great about the USA?' topic, we have been learning about the types of 'deli' style sandwiches you can get. Some of the flavours and combinations are amazing ... although some may turn your stomach. With Miss Bellwood, we have been studying flavour combinations that complement each other. Everyone loved the 'taste it and see' lesson. We have tried fillings such as cured meats, paprika cheese and sweet onion spread.  What would your ideal sandwich have on it?

Can you feel the force?

A transport company is going to buy a fleet of lorries. The manager has noticed some lorries have fairings and some don't. If he buys some he would like to know what effect they have, and which sort might be the best. With Miss Bellwood, we have been looking at wind resistance and friction and measuring the effect they have on each lorry. We hope our findings help the owner of the transport company.

During the spring term, Mrs Marshall is introducing us to the game of Quicksticks. It is a primary school version of hockey. We have started by learning control and dribbling skills. It wasn't as easy as Mrs Marshall made it look to start with but we feel we have some real natural talent. We can't wait to put our skills up against teams from other schools in the Outer West Trust.

Life in the trenches!

Milecastle Primary School very kindly invited some of our Year 5 pupils to a writing experience using their 360° projector room. We spent the day learning about the Christmas truce during WWI and life in the trenches. Each group received a box containing a postcard, stamps and a chocolate bar, just like the soldiers did during the war. By the end of the day we had become soldiers and had written diary entries about our experiences.

Our fantastic visit to the Great North Museum had Year 5 experiencing life in space and a mission to stay alive on Mars. In the planetarium, we watched the 'Dawn of the space age' - everything from Laika the dog to the Mars rover, it was a fabulous 45 minutes. In the afternoon we went on a mission to Mars - it would take us 6 months to get there and survival was the key issue.

Mrs Marshall has been coming in on Tuesdays to help us with our PE skills.  We are currently working on changing direction, throwing and catching, and using the space around us.

As part of our 'Earth and beyond' topic we have all been on a journey through the Solar System. In addition to the beautiful planets of Venus, Mars and many other wonderful celestial sights, we have all been creating our own representations of our journey using pastels and the space crafts we used. We hope you enjoy our artwork.

Many thanks to parents for supporting children with the recent 'Solar System' homework task. Children have produced work of a very high standard.