The Week Before Christmas

We have had an amazing week in school this week. There has been so much going on! First of all, we were able to watch the 'Hot Shots' band's performance - it was incredible! Lots of us got up to head-bang and air guitar! 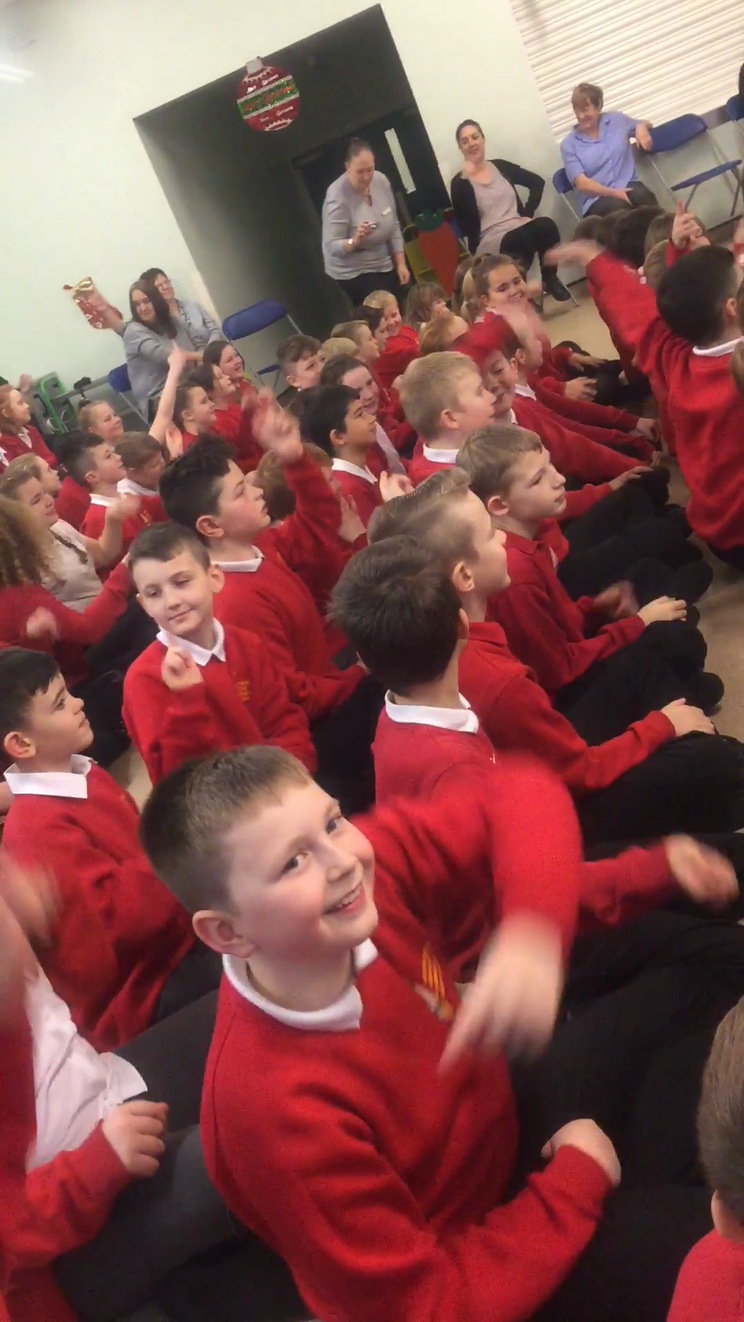 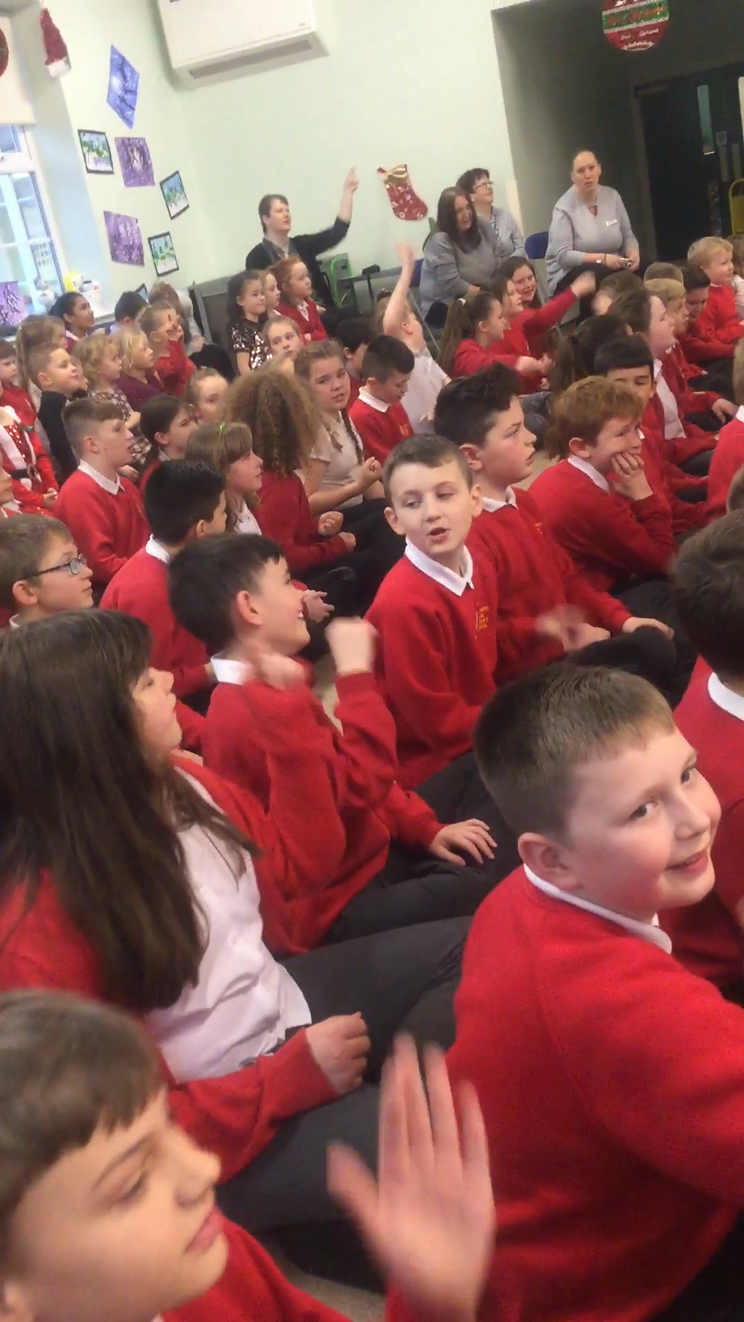 We've also had our Christmas party, which we shared with Year 4 and 6, where we danced and played games all afternoon! In Year 5, we were so lucky to have an incredible buffet of treats that the pupils had brought from home. Santa even dropped by with some presents for those on the nice list!

Last but not least, we had our Nativity performance at the church! Everyone successfully remembered their lines and cues - so a huge thank you for those of you attended!

We have been learning about measurement in maths and when we came into class one morning...there were shapes taped to our tables! Mrs Merrix told us we had to work out the perimeter of the shapes that were there. Some were easy BUT some had lengths missing so we had to work them out, using the other lengths. We had lots of fun working with each other do this, check out the pictures.

The Boy Who Lived

We have had such great fun rehearsing with Steve and Franco from the Newcastle Music Service. We have spent the last half term learning to play a range of instruments and we have written our own song...about Harry Potter. We had an amazing time performing it and definitely have some superstars in our class! Please visit the link below, you should be able to watch our whole performance.

Does the Moon Change Shape?

We've been investigating whether the Moon changes shape  or if something else makes it look like this. We found out, through research, that the Moon appears to change shape because its orbit around the Earth puts it in different positions. In each position it looks as if it changes shape because the Sun's light is reflected on it in different ways. We showed different phases of the Moon using Oreos - this was the tastiest science lesson yet!

We were so lucky to have a member of the National Marine Aquarium join us for the day. We started off with a fantastic assembly about how sea creatures use slime in different ways. As a class in KS2, we were also able to take part in a squid dissection workshop. It was so interesting to dissect the squid; we found its beak, heart, ink sack and 'pen'. Year 5 pupils took turns to find different body parts and we're so grateful for the experience.

Space, Light and Dr. Who

Our new science topic is about space and we were so excited to learn that the BBC were holding a live lesson on that topic. The lesson was broadcast to schools around the country who wanted to learn about space and light. We were able to help Dr. Who redirect a planet that was orbiting our Sun. Take a look at the photos of us taking part.

As part of our fundraising for Children in Need, we were able to come to school in our pyjamas! We were even treated to a fantastic pantomime - Dick Whittington. We all thoroughly enjoyed it, especially the part where Mrs. Merrix and Mr. Vyle had to have a dance off!

We've been thinking about our mental health and how to make sure we can maintain a positive attitude. We discussed lots of different ideas to help us, including doodling, relaxing by doing something we enjoy, talking to someone about our achievements and problems and thinking about what we are grateful for. We decided to spend some of our 'Mindful Minutes' by doodling.

A Murder Mystery at Beamish

Along with Year 6, we have been to Beamish in our first week back after half-term. During the first half of the morning, we explored Home Farm and the Pit Village.

We also took part in solving a murder mystery - this was based on a real incident in the 1890's! We had to find clues and visit witnesses within the town to solve the crime. We were experts and put all of the clues together to find the suspect.

On a lucky Friday morning, we were able to work with Mr. Pickup and we created chalk images of Hogwarts by night! We love anything to do with Harry Potter (especially Mrs. Merrix) so we loved creating these images.

In the first half-term, our topic is 'Fantastic Beasts and Where to Find Them'. As part of this, Mrs. Merrix has set us bingo homework based around this and our class read - 'Harry Potter and the Philosopher's Stone'. We have put so much effort into our work, have a look at some brilliant examples.

We have been focusing on using intense description and making sure we maintain the same level of it throughout a piece of writing. Year 5 started a narrative piece which was all about Harry Potter arriving at Hogwarts. We watched the clip from the movie and read from an extract in the book to get ideas for the plot but we come up with some great vocabulary to make our writing the best it could be. Here are a few examples of opening paragraphs.

Gazing intensely out of the cracked and scratched window, I saw a vast moving shadow moving ungracefully along the stone-slabbed, infinite platform. The steam train, which was going to Hogwarts, came to an abrupt halt and its archaic wheels screeched like a tone deaf singer. It appeared. The vast moving shadow was Hagrid! He roared, "Right then, first years, this way please!" As the Hogwarts Express' doors unlocked as wide as they could, I enthusiastically pounced from the rusty, red train with Ron by my side. While the rest of the children skipped off the train, the chatter immediately grew as they looked around at their new surroundings. The engine ticked over like a chorus of horses slowly marching, pupils inspected the infant village that hugged the platform tightly, I nervously enclosed my robes around me to disguise my skaking body from all of my friends and other pupils.

Staring anxiously out of the dusty and scratched window, a momentous shadow lumbered down the stone-slabbed platform. The steam train's archaic brakes screeched like nails on a chalkboard and came to an abrupt halt. I noticed that the momentous shadow was actually Hagrid. "Right then, first years, this way please!" he bellowed. As the Hogwarts Express' doors clunked open, I leapt onto the platform with Ron by my side. Immediately, most of the pupils started to chat to their friends with excitement on their faces. The engine was ticking like a clock passing time while the pupils were gaping at the nearby village that was hugging the platform. To protect myself from the icy wind, I shrugged my robes tighter around me.

It was the last session for this group of pupils and we all had an idea of what we wanted to make. The Invention shed was going to be taken over by creatures from the recycling store. Children were encouraged to think of the different ways they had learnt to join materials and what material would best suit their creature.

The she was very busy. What plans that were made often changed as materials were found to be difficult to use as the children had wanted. By the end of the session everyone had made a creature, I think they look fantastic, don't you?

This half-term, we have been discussing forces as part of our science topic. To test air resistance, we designed our own parachutes and tried to focus on how we were going to trap the most air resistance - the aim was to get the slowest falling parachute. We discussed shape, structure, weight and material and managed to come up with 29 different designs!

Today's session was mostly about use of tools and finding out what tools are good for which job. We used a variety of saws, hammers and screwdrivers as well as experimenting with different drill bits and drills. In fact we had so many tools that the tool box broke. Luckily we had Lincoln and Harvey on hand to fix it, using screws instead of nails to give it more strength.

Finding things in the invention shed is always a thrill and we found a whole load of computer keyboard. Have you ever wondered what is inside? So have I. We set about dismantling the boards to see what we could salvage. I am convinced we found some fairy hats. They felt like tiny squishies. If you want more information just ask any of the group.

On Monday 24th September, we took a trip with Year 6 to Belsay Hall. We arrived as writers, armed with our writing journals. We had great fun roaming the halls and even heard a few suspicious creaks and bangs coming from the walls! We have produced some fantastic writing from this visit!

Today a new group of children spent the afternoon inventing and investigating. Their first task was to pick items; 2 that they liked and 1 that they didn't like. There is so much to find in the shed that sometimes it is difficult to make decisions. I the end we all found three things. That was when the hard work started; we had to join the items together to make an invention. Leah came up with a great plan to use a peg as a fastener. I quickly copied this idea as it worked so well. Daniel turned his fastener into a design feature. We made a lot of IDK (I don't know).

In order to remember the things that we have learnt we then made a book to keep a record of the techniques and ideas that we have had.

The year 5 Sheducators had their first session in the invention shed today. We thought it would be a good idea to create some noise makers to accompany us when we parade at Wallbottle this Friday. We started the session with some idea gathering, thinking about how noise is made and what we could make. Then the children jotted down some notes about what they would need and how it might look. We all spent the next hour making. For the last half an hour we reviewed and improved are instruments.

I love the way that the invention shed allows children to explore ideas.

We have started the new school year ready for a challenge. Mrs. Merrix has been impressed with the positive attitude shown in our first week back and how ready the new Year 5 class are for the year ahead. We've had an interesting week as we began our research of the Anglo-Saxons but we've also been on a Great Exhibition of the North trail, where we visited the Sage and the Baltic. However, the most exciting part of the day was seeing Prince William as he also visited the exhibition on its last day!