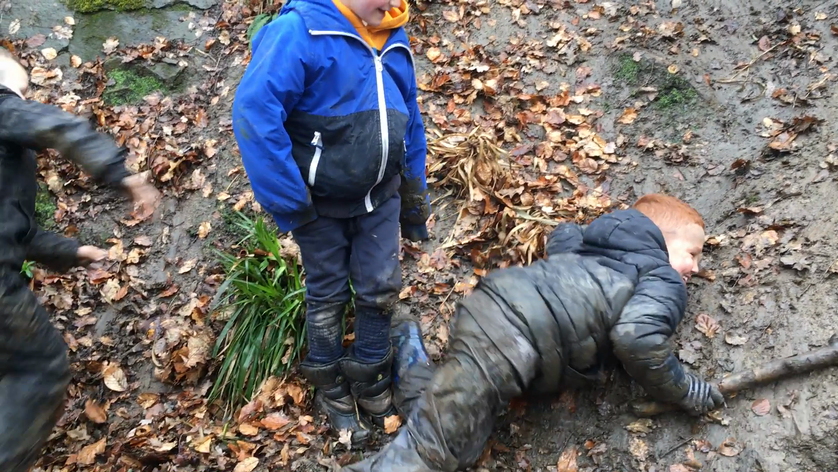 If you have ever wondered why the children come back from Forest School as they do.

The Devil's Chair and a Fire.

On our walk down to the Dene today we saw that where we usually play Wolfie Julia there had been a big fire. All the bracken that we used to hide in had gone. At first it looks terrible, but already new shoots are starting to grow through If left unchecked the bracken will choke out other plants.

When we arrived at our base some children wanted to make magic Forest School sticks others wanted to go and find the Devil's chair. I took the group for the walk. When we got there it was very muddy and hard to get to the rocks. It was great fun trying though. We got back just in time for hot chocolate and a biscuit.

As requested from last week the children learnt some new games today. We played the first game of Sticky Jack Attack as the young plants of Sticky Jack (Galium aparine, Cleavers) are just showing through. We put up a swing and whilst others were still playing some children climbed a tree and played upon the swing. In the dene the children went on a mission to find Aydin's green scarf amongst the very green garlic leaves. There was no chance but we all enjoyed trying.

When we got to our base we left the trolley and started a new game called Cuckoo. We played this all the way to a fairy tree that we found. It was so big that three children could fit into it. We then helped the dene by tidying up a whole bunch of DVDs that someone had dumped there. :-(

On the way back we spied Yr 1 who had come down to do some work in the dene. We used some of the garlic leaves to turn ourselves into garlic savages! I am not sure year 1 knew what we were.

There was just time to have some hot chocolate and have a bit of a lounge in a hammock before it was time to come home.

A full on day in the woods, lots of time to explore and reflect and enjoy the Dene in early spring.

Whilst walking down to the Dene we saw a big bonfire, we thought it would be good to explore. We found a man clearing out the conduit. It looked hard work, the children offered to help I thought it looked a bit too hard. We walked a bit further and so the start of a rhododendron bush growing. This is a very invasive plant and can soon take over whole sections of native woodland like the Dene and because it is a non native species it does not support much in the way of wildlife. We set to work and trimmed it down. It might take several goes.

When we got to the Dene we set up camp and had a look at the trees above us. It was a nice way to start the session as it allowed us to have a quite moment. We then went looking for wild garlic. At the moment there is lots and lots and is at its best now as it is young and tender. we picked enough to mash up and make into a sauce.

I worked with the children who wanted to cook. We made some soup and then toasted pitta bread that the children had stuffed with the garlic sauce they had made. It was delicious. Others were not so keen so I had extra bits.

We walked down to the Dene expecting all manor of awful weather. It was cold but nowhere near as bad as it could have been.

On the way down we found all sorts of things; ash keys, frog eyes and rabbit burrows. The Frog eyes were the berries from the ivy. We then made a game up called the frog eye witch. After playing that for a while we continued down to the Dene. The smell of wild garlic is getting very strong. I wonder if there is some way we can use it next week.

We started to make some pendants, Mrs. Heslop has a lovely Fox pendant as that is her Forest School name. Other children decided that they want to play their own games. Forest School provides children an excellent opportunity to explore and grow there social skills. They do this best through the development of their own games.

We finished with some very rich hot chocolate and a nice biscuit.

This week we did something a bit different. We decided to stay on the school Forest School site so that we could have a warming fire. To start with everyone had a go at using the flint ad steel to make a fire. It was a lot harder than it looks but in the end  everyone got a spark and most people managed to make a small fire. Of course once we had lit the fire what better way to use it than to have some giant marshmallows. These ones were HUGE!I think they may have needed some extra cooking they were so big.

After we had one fire alight we lit the cob oven. I don't know why but the pizzas made in the oven are so tasty but they are by far the best pizzas that I have eaten. Well done to all the chefs that cooked.

The disadvantage of the school site is that the trees are still little sticks so there is not yet much opportunity for adventures, never the less the children found lots to do and enjoyed the trim trail.

A new group set off to the Dene Today. They had all been before so had some ideas as to what they wanted to do. Most children wanted to visit the Climbing tree; this was the tree that James had discovered last year. Ever since it has remained a favourite with most groups. We also had a game of 'Wolfie', another child invented game.

The shoots of the wild garlic are just beginning to poke through so my hopes are that Spring is not far behind.

We made some excellent dens. They were so good that we decided to have our hot chocolate in them. It was a real challenge for the children to find ways of working together to complete the task. What I like most is when children start to use their own ideas to solve problems. One group decided to use branches to wrap the tarp around, it worked very well.

If the children finished their den then they got to map the area that we use for Forest School. I like the way that this allows the children to mark in the areas that they find exciting so that we might be able to use these spaces later on. The Cool Cat Camp had some great ideas for what some of the different spaces could be.